A tension between bayesiansim and intuition

When considering arguments from authority, there would appear to be a tension between widely shared intuitions about these arguments, and how Bayesianism treats them. Under the Bayesian definition of evidence, the opinion of experts, of people with good track records, even of individuals with a high IQ, is just another source of data. Provided the evidence is equally strong, there is nothing to distinguish it from other forms of inference such as carefully gathering data, conducting experiments, and checking proofs.

Yet we feel that there would be something wrong about someone who entirely gave up on learning and thinking, in favour the far more efficient method unquestionably adopting all expert views. Personally, I still feel embarassed when, in conversation, I am forced to say “I believe X because Very Smart Person Y said it”.

And it’s not just that we think it unvirtuous. We strongly associate arguments from authority with irrationality. Scholastic philosophy went down a blind alley by worshipping the authority of Aristotle. We think there is something espistemicaly superior about thinking for yourself, enough to justify the effort, at least sometimes.1

Attempting to reconcile the tension

Eliezer Yudkowsky has an excellent post, “Argument screens off authority”, about this issue. You should read it to understand the rest of my post, which will be an extension of it.

Scenario 1: Barry is a famous geologist. Charles is a fourteen-year-old juvenile delinquent with a long arrest record and occasional psychotic episodes. Barry flatly asserts to Arthur some counterintuitive statement about rocks, and Arthur judges it 90% probable. Then Charles makes an equally counterintuitive flat assertion about rocks, and Arthur judges it 10% probable. Clearly, Arthur is taking the speaker’s authority into account in deciding whether to believe the speaker’s assertions.

Scenario 2: David makes a counterintuitive statement about physics and gives Arthur a detailed explanation of the arguments, including references. Ernie makes an equally counterintuitive statement, but gives an unconvincing argument involving several leaps of faith. Both David and Ernie assert that this is the best explanation they can possibly give (to anyone, not just Arthur). Arthur assigns 90% probability to David’s statement after hearing his explanation, but assigns a 10% probability to Ernie’s statement. Read more

I think Yudkowsky’s post gets things conceptually right, but ignores the important pragmatic benefits of arguments from authority. At the end of the post, he writes:

In practice you can never completely eliminate reliance on authority. Good authorities are more likely to know about any counterevidence that exists and should be taken into account; a lesser authority is less likely to know this, which makes their arguments less reliable. This is not a factor you can eliminate merely by hearing the evidence they did take into account.

It’s also very hard to reduce arguments to pure math; and otherwise, judging the strength of an inferential step may rely on intuitions you can’t duplicate without the same thirty years of experience.

Just as you can’t always experiment today, you can’t always check the calculations today. Sometimes you don’t know enough background material, sometimes there’s private information, sometimes there just isn’t time. There’s a sadly large number of times when it’s worthwhile to judge the speaker’s rationality. You should always do it with a hollow feeling in your heart, though, a sense that something’s missing.

These two quotes, I think, overstate how often checking for yourself2 is a worthwhile option, and correspondingly underjustify the claim that you should have a “hollow feeling in your heart” when you rely on authority.

Ain’t nobody got time for arguments

Suppose you were trying to decide which diet is best for your long-term health. The majority of experts believe that the Paleo diet is better than the Neo diet. To simplify, we can assume that either Paleo provides \(V\) units more utility than Neo, or vice versa. The cost of research is \(C\). If you conduct research, you act according to your conclusions, otherwise, you do what the experts recommend. We can calculate the expected value of research using this value of information diagram: 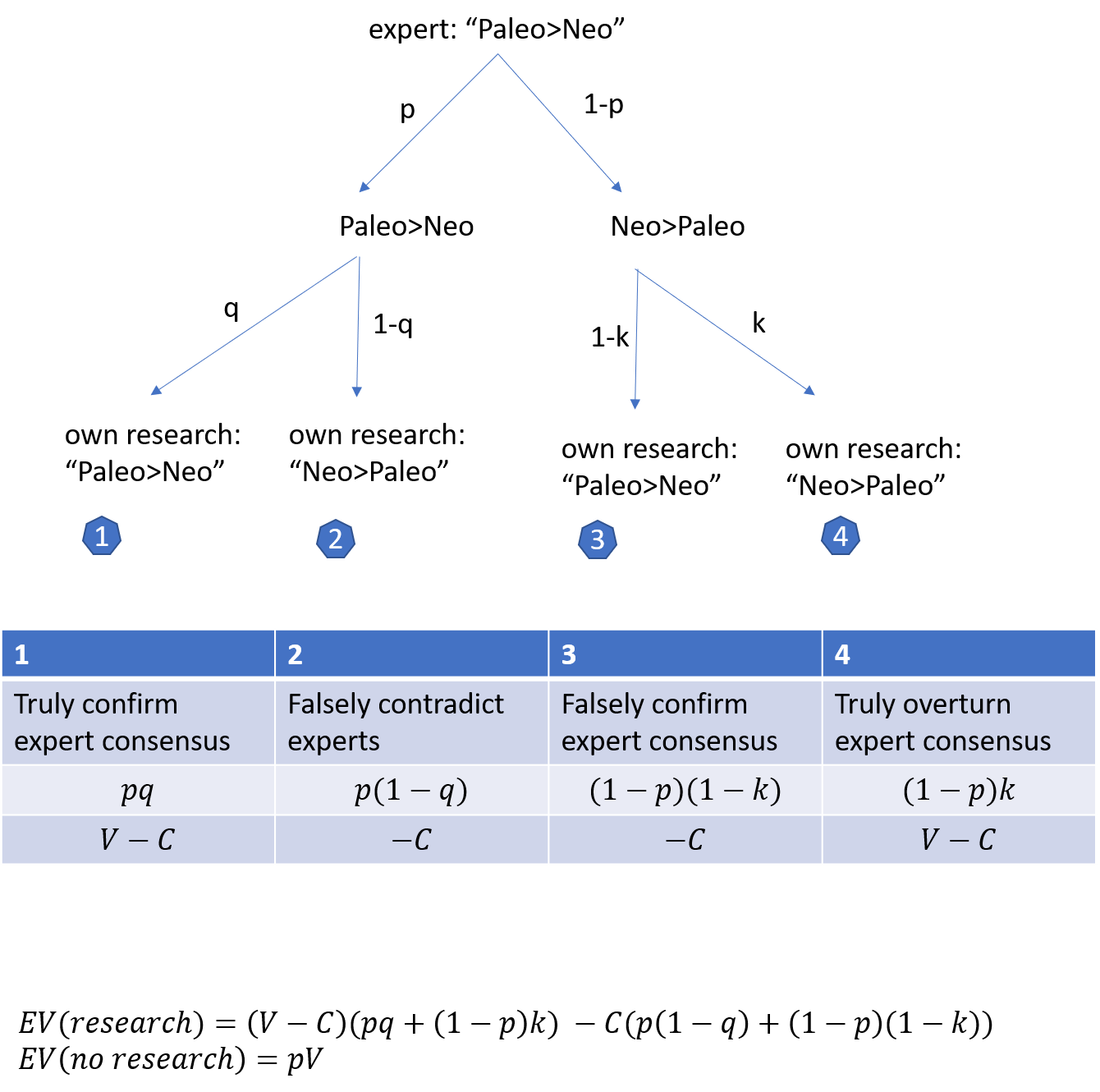 If we suppose that

How long would it take to do this research? For a 50% chance of overturning the consensus, conditional on it being wrong, a realistic estimate might be several years to get a PhD-level knowledge in the field. But let’s go with one month, as a lower bound. We can conservatively estimate that to be worth $ 5000. Then you should do the research if and only if \(V > 80,000\). That number is high. This suggests it would likely be instrumentally rational to just believe the experts.

Of course, this is just one toy example with very questionable numbers. (In a nascent field, such as wild animal suffering research, the “experts” may be people who know little more than you. Then \(p\) could be low and \(k\) could be higher.) I invite you to try your own parameter estimates.

There are also a number of complications not captured in this model:

Still, I would claim that the model is not sufficiently wrong to reverse my main conclusion.

At least given numbers I find intuitive, this model suggests it’s almost never worth thinking independently instead of acting on the views of the best authorities. Perhaps thinking critically should leave me with a hollow feeling in my heart, the feeling of goals ill-pursed? Argument may screen off authority, but in the real world, ain’t nobody got time for arguments. More work needs to be done if we want to salvage our anti-authority intuitions in a Bayesian framework.

Here’s one attempt to do so. From a selfish individual’s point of view, V is small. But not so for a group.

Assuming that others can see when you pay the cost to acquire evidence, they come to see you as an authority, to some degree. Every member of the group thus updates their beliefs slightly based on your research, in expectation moving towards the truth.

More importantly, the value of the four outcomes from the diagram above can differ drastically under this model. In particular, the value of correctly overturning the expert consensus can be tremendous. If you publish your reasoning, the experts who can understand it may update strongly towards the truth, leading the non-experts to update as well.

It is only if we consider the positive externalities of knowledge that eschewing authority becomes rational. For selfish individuals, it is rational to free-ride on expert opinion. This suggests that our aversion to arguments from authority can partially be explained as the epistemic analogue of our dislike for free-riders.

This analysis also suggests that most learning and thinking is not done to personally acquire more accurate beliefs. It may be out of altruism, for fun, to signal intelligence, or to receive status in a community that rewards discoveries, like academia.

Is the free-riding account of our anti-authority intuitions accurate? In a previous version of this essay, I used to think so. But David Moss commented:

Even in a situation where an individual is the only non-expert, say there are only five other people and they are all experts, I think the intuition against deferring to epistemic authority would remain strong. Indeed I expect it may be even stronger than it usually is. Conversely, in a situation where there are many billions of non-experts all deferring to only a couple of experts, I expect the intuition against deferring would remain, though likely be weaker. This seems to count against the intuition being significantly driven by positive epistemic externalities.

This was a great point, and convinced me that at the very least, the free-riding picture can’t fully explain our anti-authority intuitions. However, my intuitions about more complicated cases like David’s are quite unstable; and at this point my intuitions are heavily influenced by bayesian theory as well. So it would be interesting to get more thoughtful people’s intuitions about such cases.

It looks like the common-sense intuitions against authority are hard to salvage. Yet this empirical conclusion does not imply that, normatively, we should entirely give up on learning and thinking.

Instead the cost-benefit analysis above offers a number of slightly different normative insights:

A few months after I wrote the first version of this piece, Grew Lewis wrote (my emphasis):

Modesty could be parasitic on a community level. If one is modest, one need never trouble oneself with any ‘object level’ considerations at all, and simply cultivate the appropriate weighting of consensuses to defer to. If everyone free-rode like that, no one would discover any new evidence, have any new ideas, and so collectively stagnate. Progress only happens if people get their hands dirty on the object-level matters of the world, try to build models, and make some guesses - sometimes the experts have gotten it wrong, and one won’t ever find that out by deferring to them based on the fact they usually get it right.

The distinction between ‘credence by my lights’ versus ‘credence all things considered’ allows the best of both worlds. One can say ‘by my lights, P’s credence is X’ yet at the same time ‘all things considered though, I take P’s credence to be Y’. One can form one’s own model of P, think the experts are wrong about P, and marshall evidence and arguments for why you are right and they are wrong; yet soberly realise that the chances are you are more likely mistaken; yet also think this effort is nonetheless valuable because even if one is most likely heading down a dead-end, the corporate efforts of people like you promises a good chance of someone finding a better path.

I probably agree with Greg here; and I believe that the bolded part was a crucial and somewhat overlooked part of his widely-discussed essay. While Greg believes we should form our credences entirely based on authority, he also believes it can be valuable to deeply explore object-level questions. The much more difficult question is how to navigate this trade-off, that is, how to decide when it’s worth investigating an issue.

Read more:
← Oxford Prioritisation Project Review Modesty and diversity: a concrete suggestion →
Broken link? Click here to replace all links to external webpages with links to the web archive.
Leave feedback on this post. I read every message.