Fighting the evil influence of Facebook (but keeping the good bits): a manifesto and how-to guide 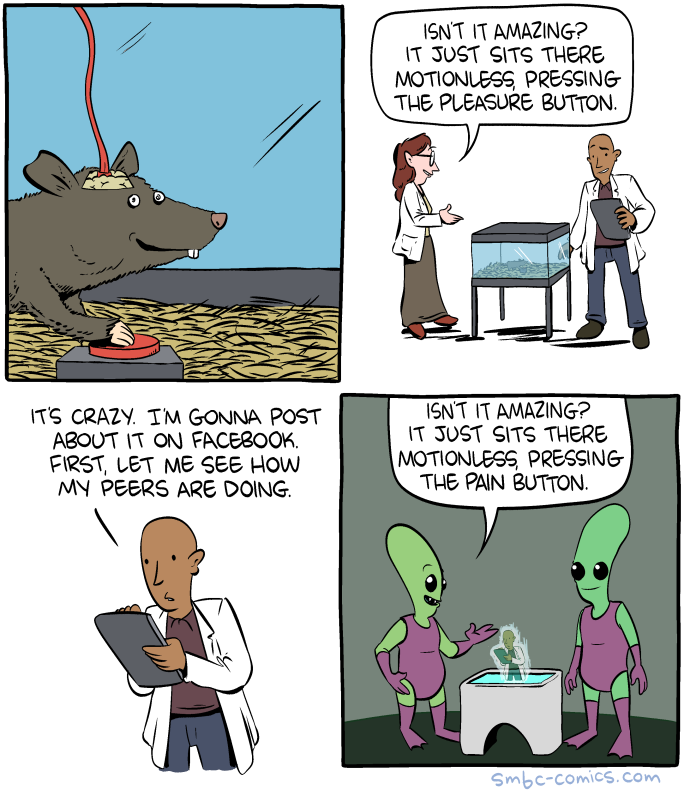 Note: In a fit of pure indulgence, I began this essay with the manifesto bit, 1400 words where I rage against certain shades of red and criticise Norwegian studies. You might justifiably prefer to skip straight to the how-to-guide.

Every day, 10,000 versions of Facebook are being A/B tested, with one goal: making you spend more time on the website, and less on life. The shade of red of the notification button, you can be sure, is the result of a ruthless optimisation process in which less addictive hues were terminated. Now, whenever that guy you met at a party three years ago likes one of your comments, the red badge sparks to life and you get to feel, for one second, like a caged rat receiving a joyless orgasm through a wire. This state of affairs has been scientifically determined to be optimal from the point of view of the shareholders of Facebook, Inc.

When Facebook started out, the best way to make users spend more time on the website was to make it more useful to them. Hence for instance photo-sharing, events, or messaging. And Facebook is still providing that value, and more. It facilitates what is good about social interaction as well as what is bad. When all these features have exhausted their potential, however, what remains to create marginal increases in engagement is to make the product more addictive.

Facebook has embraced this strategy with tremendous success. When outcomes can be easily measured and experiments are cheap to run, optimisation can proceed very quickly and does not require an understanding of the underlying mechanisms. If you used every nudge the disciplines of psychology and economics have uncovered to make an addictive website, you wouldn’t come close to this level of optimality.

Okay, I’ve been theorising a lot. This is the part where I planned to say: “How about some empirical evidence?”, hoping to settle the case with any naysayers while showcasing my epistemic virtue. Turns out the studies didn’t really agree with me, but instead of changing my mind I doubted the studies.

405 Norwegian university students were asked how often during the last year they :”(i) Spent a lot of time thinking about Facebook or planned use of Facebook?”, “(ii) Felt an urge to use Facebook more and more?” or (iii) “Tried to cut down on the use of Facebook without success?”. On average they replied that they “rarely” or “very rarely” did so.1. Among the big five, low conscientiousness predicted higher Facebook usage. Turkish researchers found similar results. The time-honoured method of eyeballing standard deviations suggests that maybe 15% of the students report engaging in addictive behaviours “sometimes” or more often.

I found these studies a bit underwhelming. Is it really true that failing to cut down on Facebook usage is a “rare” or “very rare” event? That doesn’t match what I observe in myself and others around me. Among my peers, checking one’s notifications right before and right after a class seems like average behaviour. With lectures and meals, if people don’t bother to do so it’s because they’re often on their phones during the event.

Cal Newport’s Deep Work2, and the research he discusses, rang far more true to me than the Norwegian and Turkish studies. The finding that students find Facebook only moderately addictive is also in tension with the fact that people with low conscientiousness spend more time on Facebook. (Or maybe everyone out there has just great conscientiousness, thank you very much?). For what it’s worth, I’m giving about 50% weight to these peer-reviewed, N>400, 100+-citation studies, and 50% to my intuitive guesses here.

Okay, I’d better get back to pontificating without the nuisance of empirical data.

I haven’t yet talked about the second of Facebook’s harms: social competition. Do you ever feel pain when you see pictures of your friends’ amazingly successful and carefree life, socially, romantically, and professionally speaking? I do. Social competition is a zero-sum game, and Facebook is giving us a way to shovel even more of our resources into this pit of destruction. Not only that, but Facebook is unique among dominance-hierarchy tools in giving each user near-complete control over the aspects of their life they choose to show. Everyone spends more time making themselves look good, and also feels like a social failure when comparing their actual life to the airbrushed version of other people’s. It’s like a massive prisoners’ dilemma where 2 billion people constantly defect on each other. Everyone loses, except, of course, Facebook, which collects a smidgen of revenue every time a user posts a photo and makes someone else sad.

This time peer review has valiantly come to my support. One study using experience sampling reports: “The more people used Facebook at one time point, the worse they felt the next time we text-messaged them; the more they used Facebook over two-weeks, the more their life satisfaction levels declined over time.” A study on panel data which used objective measures of Facebook use, pulled directly from participants’ Facebook accounts, found that “a 1-standard-deviation increase in likes, links clicked, or status updates was associated with a decrease of 5%-8% of a standard deviation in self-reported mental health”.

Okay, but we should be sceptical of differences-in-differences. How about an RCT? I found a few experiments3, and they all show that Facebook usage makes people sadder. This was especially the case for passive use as opposed to active use (posting, messaging, commenting); and envy4 was thought to be a major explanation. I especially liked this Danish study which asked randomly assigned half of 1095 people to quit facebook for a week (participants claimed 87% compliance!). It found that the quitters were happier, p < 0.001. The effects were strongest for subjects who reported feeling high levels of envy when browsing Facebook. Sadly, there were strong selection effects since participants were recruited by voluntary sign-up through a link posted on Facebook.

To sum up: the raw material of Facebook is information about every player’s maneuvers in your local social constellation. Who’s up, who’s down, who’s making allies or enemies with whom, and crucially, who’s fucking whom. No wonder your crave this stuff, since the very reason our brains are so big is that they evolved in an arms race to move up in the tribe’s hierarchy of sexual success, at least according to one leading theory. This juicy raw material is then presented in maximally addictive packaging.

If Facebook is so bad for people, why don’t they stop using it? A first level of explanation is addictiveness. Just like the human in the comic above, it’s perfectly possible for organisms to repeatedly make choices that create more pain in their lives overall, if they receive carefully timed hits of pleasure and relief. At a second level, evolutionary biology tells us that winning the social rat race will be favoured by your genes even if it makes you miserable.

Third are network effects. I have tried to convince you that Facebook causes large harms, but I think it also creates a lot of value. So I would guess that quitting Facebook as an individual, while better than you probably think, could end up not being worth it for many people. But why then don’t they switch to a different social network, with all of the benefits and none of the costs? (Perhaps one that makes money from subscription fees, aligning its incentives with yours.) Because of network effects. It’s very hard to start a movement to a new network when everyone is already on Facebook.

This brings me to my proposed solution, which fights the evil in Facebook while retaining some of the good. I’ve been very happy with this trade-off; aggressively pushing back against Facebook use has improved my life. Here is what I’ve done.

Facebook has billions of dollars and hundreds of shade-of-red-optimising engineers in this fight. That means you need to bring the big guns too.

The main theme here is: keep valuable sources of information, relentlessly cull everything else.

Read more:
← Oxford Prioritisation Project Review Why don't we like arguments from authority? →