The formal structure of ethical theories

This diagram illustrates some popular theories of normative ethics, with a particular focus on consequentialist theories and their internal structure.

Theories of normative ethics, and the structure of consequentialist theories. Here’s the same diagram as a .png and an .xml.

The term “consequentialism” has been used in many different senses. Of course, what matters are not the words, but to clearly distinguish different distinctions. What’s important about the diagram above is how it carves up the space of possible theories, not what the theories are called. Let me just clarify how I use the terms.

John Broome (1991, Chapter 1) calls this the distinction between teleological and non-teleological theories.1

[Suppose that] by breaking a promise now I can bring it about that I shall, in the future, keep five promises that otherwise I would have broken. Suppose, say, that if I break a promise now, the experience of guilt at my present tender age will stiffen my resolve in future life.

In this case, any theory that says I ought to keep my current promise would have to be non-consequentialist.

Any consequentialist theory combines a cardinal axiology and a decision rule that depends only on this axiology in order to compare evaluands.

An axiology is a ranking of states of affairs in terms of better and worse overall. A cardinal axiology assigns numerical values to states of affairs. The axiology used by a consequentialist theory must be cardinal in order to be able to apply expected utility theory when there is uncertainty.

An axiology is welfarist if it’s about what makes the life of persons (moral patients) go best. Non-welfarist axiologies might care about other features of states of affairs, like complexity or beauty in the universe, independently of what is good for any person. “Go best” is here intended to encompass a wide range of theories of well-being. Three common theories of well-being are the hedonistic, desire fulfilment, and objective list theories discussed by Parfit (1984, Appendix i).

In a universe with more than one person, a welfarist also has to give an account of how to aggregate welfare across persons. This is population ethics. Again there are many different views of population ethics, I depict only three in the diagram. Totalism is the view that the value of a state of affairs is equal to the sum (as opposed to, say, the average) of the welfare of all persons.

An evaluand is anything that could make states of affairs better or worse. Evaluands could include acts, desires, dispositions, beliefs, emotions, the colour of our eyes, the climate, etc.

In almost all cases, an evaluand combined with an axiology in the following direct way. Within a set of mutually exclusive evaluands, each evaluand is given the cardinal value of the state of the world that would result if the evaluand were to obtain.

In theory it’s also possible to assign a value to an evaluand indirectly. I only discuss this possibility because it has been the source of confusion. The name “rule consequentialism” has been applied to both a direct and an indirect theory. Direct rule-consequentialism is consequentialism applied only to rules, and has the same structure as act-consequentialism. Indirect rule-consequentilism assings values to acts according to the goodness of the state of affairs in which the rule obtains. For both theories, a bit of additional precisification is needed to explain what it means for a rule to “obtain”. Does it mean that the rule is widely or universally followed? That people intend to follow it?

The result of combining an axiology with a set of evaluands is an assignment of values to evaluands, which is what the blue box depicts.

A decision rule, for our purposes, is a procedure that classifies evaluands into right, wrong, or neither. The decision rule is what gives rise to a theory’s normative pronouncements: its “ought” and “ought not”-statements (much more on this below). A maximising decision rule says that the object which makes states of affairs best (according to some axiology) is right, and all others are wrong. An example of a non-maximising decision rule is satisficing: everything that makes states of affairs better than some threshold is right (or at least not wrong).

Older theories of ethics, like, say, the ten commandments or Kantianism, were built entirely around a list of prohibitions. They are essentially just a decision rule, and they only apply to acts. These decision rules pronounce some acts right (and mandatory), some wrong (and forbidden), and make no normative statements about the majority of acts, calling them neither right nor wrong, and permissible. They do not involve an axiology.

This is not to say that these decision rules are chosen by mere intuition (what Will MacAskill would call “no-theory deontology”). Philosophers (famously, Kant) have developed intricate justifications for their decision rules. But these justifications do not involve axiologies, or degrees of goodness which are then compressed down by a decision rule. 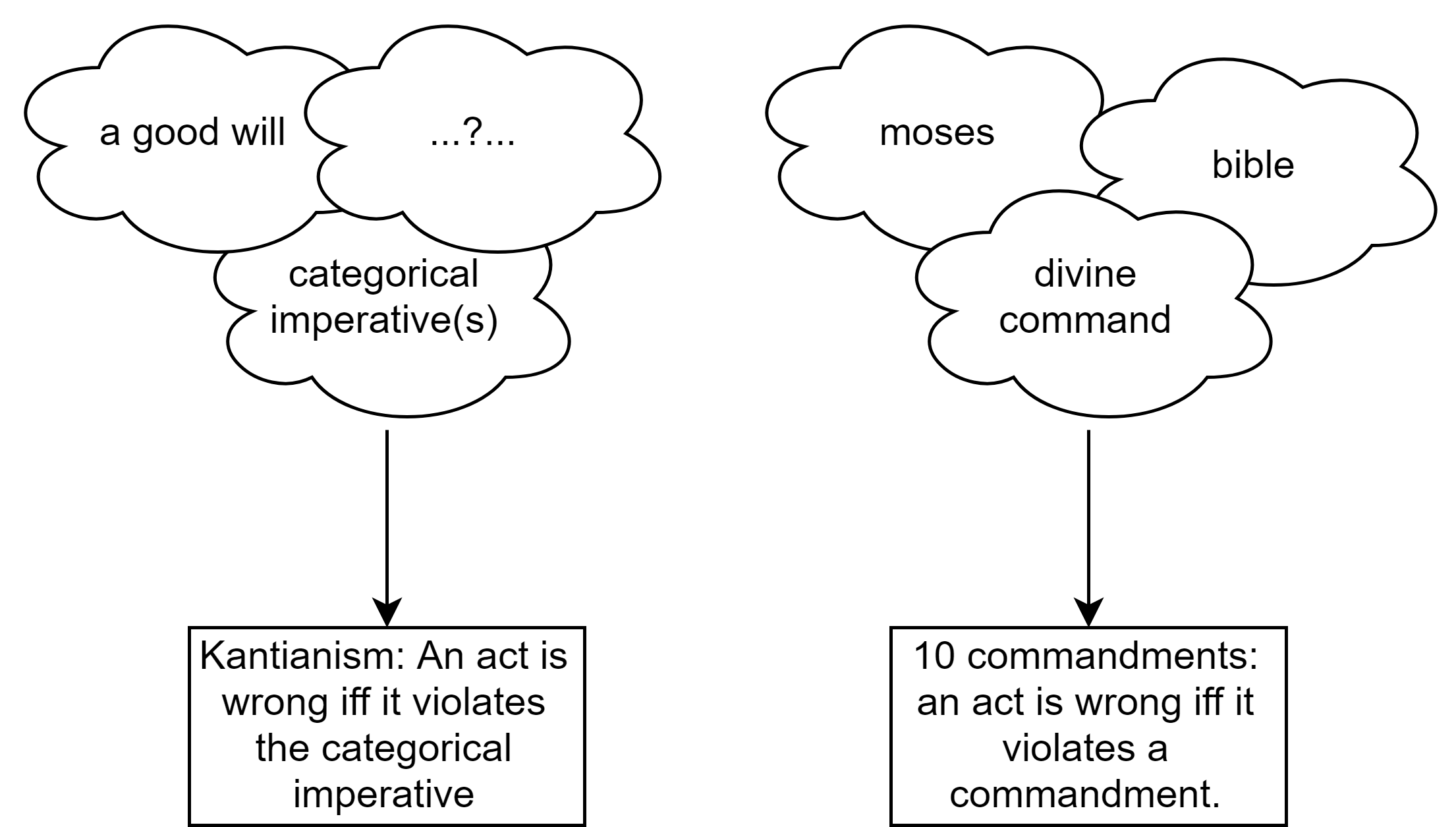 The structure of older theories

Theory C applied to acts vs the spirit of consequentialism

I must here make a point that may appear somewhat technical and pedantic. But it actually has some importance (especially if you’re interested in understanding how academic philosophers talk about consequentialism).

Let’s consider the intersection of theory C and act-consequentialism, or, equivalently, theory C applied only to acts. That is, let us consider a consequentialism that is maximising and applied only to acts. Call this theory Act-C. Act-C claims only that the unique right act is the act which would make outcomes as good as possible. It picks out just one mandatory act and makes all other acts impermissible.

The technical point is: Act-C has the same formal shape as these older theories. Of course, what is really of interest to consequentialists is something much richer than Act-C. It is richer in two ways. First, consequentialists care about all evaluands, not just acts; they see no reason to focus the particular subset Act-C of C. Second, what animates them is not even really C itself, but rather the assignment of cardinal values to evaluands (blue box), which, when combined with maximisation, produces theory C as its output.

On the first point: consequentialists have no particular hang-up about acts. They endorse the evaluation of all evaluands according to their consequences, and use whatever evaluand is appropriate.

On the second point: the motivating idea of consequentialism is not to pick out one act as the right one. It’s to assign cardinal values to acts (and to motives, dispositions, or anything else you might be able to affect) and to say: “that’s how good it is!”. That is what we find in the blue box. The move from the blue box to the red box is an act of lossy compression, throwing out almost all the information and retaining only a ternary3 classification4. That is why I call the red box only the “normative output” of consequentialism. It’s what a consequentialist will say if forced to make “right/wrong”-statements.

In sum, Act-C is a doubly watered down of the real idea behind consequentialism.

Why Act-C has received so much attention

What I’ve said is very obvious. Discussing the definition of Act-C as I did may seem rather like philosophic pedantry. I share that sentiment.

Yet Act-C has received most of the philosophical attention devoted to consequentialist theories.

I haven’t delved into this pedantic distinction just because I’m interested in history of philosophy for its own sake. I think it can actually teach us something. Two common objections to consequentialism are (i) that it’s too demanding and (ii) that it’s self-defeating in a damaging way. The demandingness objection is narrowly targeted at theory C rather than at the spirit of consequentialism, so it is revealed to misconstrue that spirit. The self-defeat objection is aimed even more narrowly at those who (naively) would apply C only to acts rather than to everything. Hence both objections lose much of their force.

In a sense, the order in which ethics has developed has given an unfair incumbency advantage to the older theories. Those theories shaped the terms of the debate, allowing attention to be focused on strange, shoehorned versions of consequentialism, rather than letting consequentialism shine in its natural form.

Theory C is sometimes said to be too demanding, constantly requiring us to do the very best thing, lest we be hit with the moral opprobrium of the theory. To indulge in caricature: deontologists think of morality as a matter of whether or not the heavens will part and god will thunder down at you: “WRONG!”. And it does seem a bit excessive to be thundered down at every time you don’t do literally the most altruistic thing possible.

Consequentialism needs to be thought of more like a general injunction to maximise good consequences, rather than a god who rains lightning on you if you don’t attain the exact global maximum.5

Some might find even that too demanding6. But at least the basic form of the demandingness objection is deflected.

Consequentialism is often said to be self-defeating in some damaging way. For example: making decisions by means of consequentialist calculation might lead to a sort of “alienation” between one’s affections and one’s deliberative self – one that in turn leads to a sense of loneliness and emptiness, and is destructive to valuable relationships. Hence even a consequentialist should not, by his own lights, desire that people make decisions by explicit appeal to consequentialist reasoning. Hence Bernard Williams writes “Utilitarianism’s fate is to usher itself from the scene” (‘A critique of utilitarianism’, p.134)7.

These statements do not contradict each other. Hence there is nothing self-defeating about C when applied to decision-making and motivation. There is no logical contradiction. It is somewhat counter-intuitive that the act recommended by C may fail to coincide with the act that would be chosen given the decision procedure or character trait recommended by the same theory. But it actually fits perfectly with our picture of human psychology.

Theory C takes no view on the question of whether homo sapiens are best thought of as “choosing” acts, policies, entire sets of motives, or something else. It’s a topic for decision theory and psychology. It may have great practical importance, but in the realm of evaluating C, it is not relevant.

In this context, the self-defeat objection could be rephrased as: “Humans shouldn’t be thought of as really choosing acts. Rather, the proper evaluand of human moral theorising is motive or character.” The consequentialist may well agree. She might reply: “this claim seems to have some truth to it, but is certainly not an objection to C. It’s a claim about which parts of C are most useful for humans.”

Read more:
← Ontology and personal identity The definition of effective altruism →
Broken link? Click here to replace all links to external webpages with links to the web archive.
Leave feedback on this post. I read every message.